Chinese manufacturers are seeking to bypass shipping delays by exporting their goods overland, a surge in demand in Europe causing transcontinental rail freight to surge.

The country’s rapid recovery from the pandemic helped it dominate global trade in the second half of 2020, with lockdowns boosting foreign appetite for its manufactured goods, from electronics to home appliances.

But the pressure on transit times at sea and container shortages have made land exports to Russia and Central Asia an attractive alternative, according to companies and agencies.

More than 2,000 freight trains have traveled from China to Europe in the first two months of this year, double the rate a year earlier when the coronavirus first struck. For all of 2020, the total number of train trips increased by 50%, according to official data reported in state media – and has increased sevenfold since 2016.

Even though the China-Europe express continues to increase its capacity, it is still not enough

Nina Fang, a salesperson at an exercise equipment company in Yiwu, said her company usually exports by sea. But prices had “skyrocketed” since the middle of last year and transport time had doubled, prompting her to switch to rail.

“Our main customers in Europe, such as France and Germany, have complained about the lack of efficient transport. [and] that they might reconsider other exporters, ”she said. “Now, we mainly depend on the China-Europe express service to deliver our goods.”

In 2020, China overtook the United States to become the EU’s largest trading partner in terms of goods, according to Eurostat The data, with total imports from China increasing 6 percent to 384 billion euros ($ 454 billion).

But the recent surge in land transport from east to west comes against the backdrop of serious disruptions to container ships, one of which this week blocked the Suez Canal after being stranded.

It was also unexpectedly facilitated by the Belt and Road Initiative. Beijing’s international infrastructure strategy emphasized the symbolism of “steel camels” and encouraged Chinese provinces to subsidize the cost of cross-border rail transport.

Video: How the coronavirus is changing global shipping routes

China Railway Express, the state-backed company, added freight routes to cities such as Madrid and London in 2017, although they typically relied on existing lines.

“When Belt and Road was launched [in 2013], much of the conversation was about rail, ”said Agatha Kratz, analyst at Rhodium Group, who highlighted the“ PR ”of rail transport. “The only reason they were running was because of the huge grants from municipalities,” she added.

The provinces have recently invested in transportation specifically for items in high demand during lockdown times. In February, a train in Jiangxi province was loaded with 50 cars of washing machines and other appliances and sent on a 15-day trip to Moscow.

Specialized agencies in the major port cities of Shanghai and Shenzhen, which provide export services to small businesses, said some of their customers are turning to rail transport. 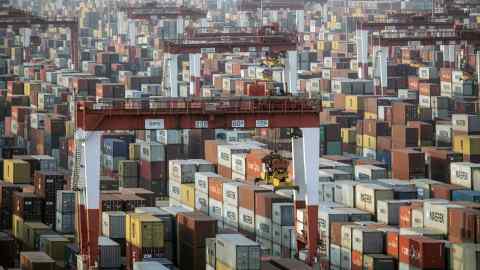 “Lockdown electronics, fitness equipment and Covid related products would choose ground transportation these days. They are in high demand and urgent, and so are they. . . not suitable for air travel, ”said Fiona Wang, an agent in Shanghai, who also cited shipping delays.

“Even if the China-Europe express continues to increase its capacity, it is still not enough,” she added.

Another agent in Shenzhen said that between 20 and 30 percent of his customers had switched from sea to rail, and container shortages that had affected sea routes were also affecting land transportation.

She added that she expected customers to eventually return to shipping lanes when the pandemic was brought under global control. “The current market is abnormal,” she said.