US inflation rose 4.2% in April from its level a year ago, a bigger jump than economists had predicted, fueling fears that the world’s largest economy is overheating.

The rise in inflation reflects a combination of strong budget support, supply bottlenecks and increased spending as economic activity picks up after the rollout of coronavirus vaccinations.

US stocks fell after the inflation report, the S&P 500 closing 2.2 percent lower, its biggest one-day decline since February. The highly technological Nasdaq, whose companies are particularly sensitive to rising inflation and interest rates, lost around 2.7%.

A selloff in US government bonds also accelerated, pushing the yield on the benchmark 10-year bond by 0.06 percentage point to 1.68%.

The increase came as the European Commission sharply raised its economic forecast for the next two years, with the accelerated vaccination campaign helping the euro area recover from the pandemic.

In the United States, the 4.2% rise in inflation is the biggest increase since 2008 and a significant jump from the 2.6 percent reading in March.

The surge reflects the relatively low inflation levels at the start of the coronavirus outbreak. This poses a challenge to U.S. economic policymakers, both the Federal Reserve and the Biden administration, who continue to pursue heavy monetary and fiscal stimulus to help the United States recover from the pandemic.

In response to the data, the White House Council of Economic Advisers said the US economy was experiencing price “normalization” as it recovered from the pandemic. “There will be months that will fall below or above expectations as the strong demand meets the upturn in supply. Recovery from the pandemic will not be linear. The Council of Economic Advisers will continue to monitor the data as it arrives, ”he said.

Richard Clarida, vice-president of the Fed, said he was “surprised” by the significant rise in inflation, but he still expected inflation “to come back – or perhaps exceed – our 2% longer term target in 2022 and 2023 ”.

If “demand relative to supply was excessive” and persistent and pushed inflation up “, the Fed” would not hesitate to act and use our tools to bring inflation down, “he said. -he declares.

Some Republicans took to the data to point out that the Biden administration and the Fed had underestimated the risk of higher inflation.

“With the release of the Consumer Price Index this morning, it’s clear that inflation is here,” Pat Toomey, Republican Senator from Pennsylvania, wrote on Twitter. “The Federal Reserve can no longer pretend this is a distant problem. It is time for the Fed to review its accommodative policy. ”

However, many economists do not expect a permanent surge in inflation.

“We share the Fed’s view that this is not the start of an upward inflationary spiral. We are looking for the supply [and] demand imbalances need to be gradually resolved and the pace of inflation gradually cooled as we approach 2022, ”said Kathy Bostjancic and Gregory Daco of Oxford Economics.

“The Fed isn’t going to panic after a startling CPI report, so you can expect to hear even more about the transient inflationary pressures from bottlenecks over the next few weeks,” said Ian Shepherdson of Pantheon Macroeconomics . “But this report means that the first part of the story of rising inflation – the reopening peak – is real. This is no longer a forecast and big increases are coming. “

Fed officials have become more tolerant of inflation, in part because consumer prices have often been below the central bank’s 2% target. Even with loose monetary policy, they struggled to push it up. 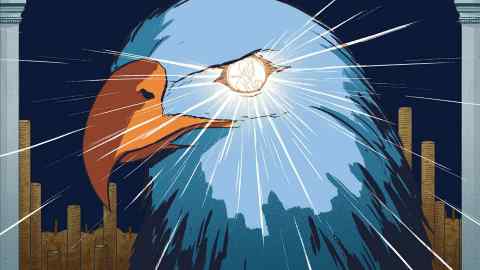 Despite the limited concern of the Fed and the Treasury, the alarm over higher inflation has become quite prevalent in US business and has been cited by investors as a stock market liquidation this week.

Warren Buffett, managing director of Berkshire Hathaway, said this month that executives at his company were experiencing “very substantial” inflation. “People are pushing the prices up on us and it is accepted.”

Tyson Foods said this week that it has significantly increased prices. “Overall, we are seeing an accelerating inflationary environment which is creating a significant headwind for prepared foods in the second half of the year,” said Donnie King, its COO. “We are seeing an increase in raw material costs of more than 15%, as well as an increase in logistics, packaging and labor.”