Anna’s attempts to ask her manager for help with an abusive coworker were unsuccessful. “My boss just told me, ‘He’s an idiot, wait until he’s wrong.”

Being relatively new to her job, she lacked allies to give her perspective to the marketing company she joined. Feeling unhappy and lonely, she contacted me for psychological coaching to try to find a way to cope with her situation.

Like Anna, many people struggle to find the clarity and confidence to come out of abusive circumstances at work. Instead, they tend to think, “What did I do wrong? “

In a very volatile situation, it is too easy to overestimate your part in what happened when it could be the product of a dysfunctional organization or just individual behavior: an intimidating boss or a coworker. toxic. Often times the culprit is successful and charismatic and this only adds to the confusion.

Plus, if your impressive work is the envy of you, then attempts to right things up by improving your performance can only make it worse. Likewise, if attempts to defend yourself are interpreted as questioning the competence of the culprit, you are unlikely to be successful in getting your point across. Expressing your feelings to a coworker who makes your life miserable only makes sense if they can control their emotions.

Anna, who is an American in her 30s, feared for her job when the aggressive coworker interfered in her work, attacked her character, complained about her and threatened to have her fired. Things got worse because the situation triggered traumatic memories of bullying that she experienced as a child.

She explains, “I had a vision of how we behave and he started to question that. Which made me wonder, “Is something wrong with me?” And because I had no idea where the calibration was, it created a tremendous degree of constant fear and dread.

I explained how his coworker’s behavior was almost certainly designed to make Anna feel bad so as not to feel inadequate himself. It also seemed clear that the coworker was not going to leave and that the company was unlikely to take any action. Once Anna was able to deal with these realities, she was able to pull through and plan for her exit.

She says: “What was helpful in our conversations was to unveil the culture of the organization, its psychology, its DNA – it was clear the organization didn’t care. There is a CEO who is very controlling and he sees everyone as totally replaceable and worthless. “

Changing her perspective not only alleviated her fears, but her confidence returned as well. She no longer allowed herself to be the target of her colleague’s unfair projections. With this insight, she could react to what was really going on, rather than reliving the traumas of childhood.

“I don’t like to deal with screams and ‘BS’, but I [now] realize it’s just nasty the same way getting caught in the rain is nasty. It doesn’t mean anything to me, it just means I get wet.

At work, there is seldom the time, expertise, or motivation to work through entrenched psychological issues. It’s often easier to absorb negative projections from others than to accept that your organization isn’t interested in you and protecting you from harm.

However, the risks of serious damage to self-esteem, burnout or depression are high. Such states of mind cloud thinking and decrease concentration, leading to decreased self-confidence and performance. The optimal goal should therefore be to protect oneself. Practice limitation of damages by not calling them into question as much as possible, changing jobs in the company or looking for another job.

While the prospect of leaving can be intimidating for some, especially if their confidence has collapsed, it is much easier to leave a toxic situation than to recover from its long-term ill effects.

Michael, 35, a communications manager in a manufacturing company, also initially took responsibility for a conflict with his manager. But in reality, his boss envied Michael’s exuberant personality and imaginative ideas. When he did well, his boss lambasted.

“I felt deeply demoralized,” says Michael. “There is a certain madness – I started to think that there must be some sort of private language or way of doing things that I hadn’t read and that none of my skills were relevant to. .

“I realize now that it wasn’t mine. My manager was deeply anxious and projected his own anxieties onto his team. “

Michael’s psychological makeup was such that he always struggled to adjust and work harder when the going got tough, but that only made matters worse. The learning curve for him was to recognize that, no matter how committed, energetic, and honest, he was never going to thrive in this particular organization. Finally, he was able to leave knowing that the failure was not his.

“For years I assumed the job was there to validate you, but then I found out that no matter how hard I worked, that validation didn’t come. It was a sobering experience, it certainly made me mature. 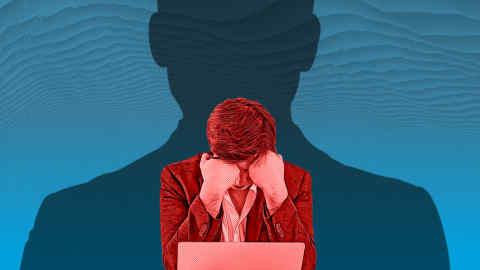 Realizing that not everything is solvable can be frustrating, but it’s also a relief to know that it’s not all up to you.

“I had a vastly exaggerated sense of my own ability to shape organizations,” says Michael. “Like an abusive relationship, it’s hard to have the courage to leave – in the end, that was the best thing I did.”

If you find yourself demoralized, depressed, or exhausted at work due to an abusive relationship or toxic culture, find someone you trust – a former mentor, close colleague, or coach with a psychological background – to give you some insight. perspective. They may be able to interrupt the self-defeating monologue in your mind and offer more realistic explanations and solutions for you to consider.

Also ask yourself if the circumstances are just difficult and need to be overcome, or if they are symptomatic of a difficult individual or a larger cultural issue that is unlikely to change.

Getting away from a toxic environment is invigorating and almost always a relief. Making sense of the experience allows you not only to leave the bad work behind, but also the bad feelings. The ultimate goal is to leave with your self-esteem intact.

The writer is a business consultant and psychotherapist. She is the author of the forthcoming book “The Man Who Confused His Work With His Life”.