The uneven rate at which countries vaccinate their populations against Covid-19 is the biggest threat to a global economic recovery, the governor of Italy’s central bank said, ahead of the country hosting a G20 summit this week.

Ignazio Visco, who will co-host the virtual meeting of G20 finance ministers and central bank governors with Daniele Franco, Italy’s economy minister, on Wednesday, warned that an uneven deployment of international vaccines could lead to drastic recoveries different for developed and developing countries.

“The main instrument we currently have is neither monetary nor fiscal, it is vaccinations,” he said in an interview with the Financial Times.

“We must maintain close international cooperation within the G20 to prevent the different stages of the vaccination campaign in different countries from leading to excessive discrepancies between the respective economies.”

Visco praised the cooperation between governments in responding to the pandemic so far, but said ongoing multilateral measures would be essential to ensure an evenly distributed global recovery.

“We must not waste what we did last year: one of the main lessons from past crises is that we must be very careful not to remove support measures too early,” he said. . “The vaccination campaign allows us to see the light at the end of the tunnel, but we cannot make mistakes.”

Visco also defended the scale of Europe’s economic response to the pandemic compared to the United States. He pointed out that significant amounts of stimulus have also been provided by national governments alongside the EU’s € 750 billion post-pandemic stimulus fund, known as “New generation EU“.

“The European Next Generation plan has a completely different nature [to the US stimulus] because, although smaller in size, it will mainly consist of investments in infrastructure, ”he said.

“This choice is also due to the fact, generally overlooked by many commentators, that very large relief packages have been implemented in Europe, and are still operating, at the level of national governments.”

All major European governments, Visco said, had sharply increased their budget deficits to provide direct aid to households and businesses outside the scope of the EU stimulus fund.

This week’s G20 meeting comes as the pace of the US vaccination campaign has increased significantly compared to the EU. Economists also predict that the US economy will grow faster than that of European countries this year.

Visco said progress on the EU’s vaccination program meant the bloc would not be left behind by the United States. However, he added that reducing this risk to developing economies was a priority. 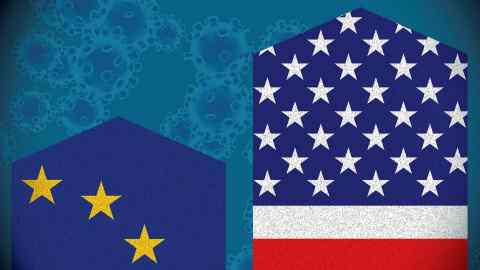 “It’s not so much a problem for Europe compared to the United States – as the EU aims to immunize a substantial fraction of the population by July – it is rather a question of advanced economies compared to developing economies. ”

Visco also said the G20 meeting will focus on measures to help developing economies recover, including ongoing discussions on increasing the IMF’s issuance of Special Drawing Rights (SDRs), a financial instrument that would strengthen the balance sheets of these countries.

“The G20 is aware of the serious difficulties facing the most vulnerable countries and is committed not to offer sterile solidarity. . . but concrete help to ensure that these countries have the necessary resources to respond to the crisis and can then get back on track, ”he said.

This would include a discussion of extending beyond June of this year the so-called debt service suspension initiative, which provides temporary relief from debt repayments for 73 eligible poor countries.

Visco said the allocation of SDRs “would provide unconditional liquidity to low-income countries, helping them cope with the liquidity problems caused by the pandemic.” He added that it was “crucial to ensure that the new resources available go to those who really need them and not, for example, to pay off past debts”.