China’s growing military and economic presence in the Atlantic region is expected to trigger a rare warning from NATO leaders about the potential security threat when they meet on Monday, diplomats said.

From joint Chinese exercises with Russia to Western fears that China wants to set up military bases in Africa, NATO’s focus reflects China’s primacy among Western foreign policy concerns, especially those of US President Joe. Biden.

“It’s not about ‘NATO is going to China,'” said Claudia Major, defense analyst at the German Institute for International and Security Affairs. “It’s about ‘China is coming to Europe and we have to do something’.”

In 2015, joint military exercises with Russia brought the Chinese navy to the Mediterranean and the heart of Europe for the first time. Since then, China has built the largest naval fleet globally and invested in critical European infrastructure, including ports and telecommunications networks.

“China [through its navy] went through the Indian Ocean, down the Gulf, to the Red Sea and they’ve been in the Mediterranean, ”according to a British military official, who said China had yet to deploy submarines in the ‘North Atlantic but that it could do so in the future.

“You build nuclear submarines for range and stealth. And China likes to test the borders.

The planned joint statement by the transatlantic security alliance, which diplomats said was still under discussion and subject to change, would only be the second time NATO leaders have tackled the subject of China head-on. The premiere took place in December 2019, at the insistence of Donald Trump’s administration.

But Biden is understood as push for harsher language than the bland terminology “opportunities and challenges” used at that time.

Internally, NATO countries are divided on how to treat China: Hungary, a member, for example, has good political connections with Beijing.

Additionally, there is a reluctance to face Beijing in its own Pacific region – although the UK and France have followed the US by deploying ships to carry out freedom of navigation exercises in the South China Sea.

China’s joint military operations with Russia are viewed as a particularly unwelcome development by some NATO members. In addition to their annual military exercises, Beijing and Moscow recently added joint missile defense exercises and training for internal security forces.

“Their [the Chinese/Russian] the relationship is transactional and pragmatic rather than ideological, ”said the British military official. “But working together in any form gives you confidence. And trust is something we need to be wary of.

As the Center for a New American Security, a bipartisan American think tank, warned in a January report: “Where Russian and Chinese interests align, Moscow and Beijing could eventually coordinate their combined capabilities to challenge US foreign policy. ”

Another NATO anxiety is Africa, which China could use to expand its military presence in the Atlantic as part of its long-term goal of becoming a truly global armed force.

General Stephen Townsend, head of US Africa Command, told the US Senate in April that his “number one concern for global energy competition” was what he described as China’s efforts to establish a militarily useful naval installation on the west coast of Africa. “I’m talking about a port where they can rearm with ammunition and repair warships,” he said.

Chinese military experts said there was no evidence Beijing was trying to establish such a West African base at this time. However, China has a base in Djibouti and has already used international anti-piracy missions in the Gulf of Aden to train thousands of military personnel and build military relationships with countries outside of its usual neighborhood.

Whenever a naval contingent completes its deployment, for example, it usually makes a detour on its way home. Some have visited the Mediterranean and the east and west coasts of Africa.

Another trend that annoys NATO allies is the growing involvement of Chinese companies in critical infrastructure in Europe, for example through Huawei telecommunications company. 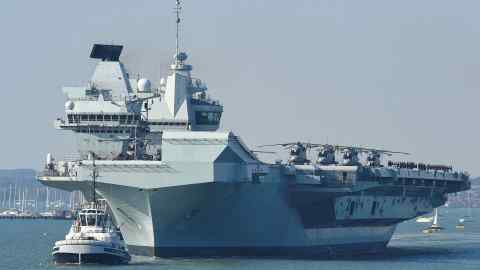 The Chinese state-owned shipping company Cosco also owns majority stake in Piraeus, the largest port in Greece, and is said to be in talks to invest in a port terminal in Hamburg.

Such economic ties complicate NATO’s efforts to create a unified approach to China, as do the political relations between Beijing and friendly European leaders.

This creates the potential for clashes, with the firmer stance of Washington and NATO Secretary General Jens Stoltenberg who last month warned that China “came to us” in areas such as cyberspace, Africa and the Arctic.

“There is a risk that this discussion within NATO will reveal very uncomfortable differences between the allies over how China is actually viewed as a threat,” said Sarah Raine, geopolitics and strategy expert at the United Nations. ‘International Institute for Strategic Studies.

“The point is, there are countries that are seen by the hawks as making very pro-Chinese arguments within NATO, at least when it comes to being robust but not confrontational.”