Republicans loyal to Donald Trump have raised record amounts in the first three months of this year, even as U.S. companies have announced they will pause or halt political donations following the Jan.6 siege on the US Capitol.

Hawley grossed more than $ 3 million in the three months ending March 31, compared to some $ 120,000 in the first quarter of last year. Cruz raised $ 3.6 million, compared to the $ 1.6 million he raised at the same time last year. None of the senators are re-elected before 2024.

At the same time, Taylor Greene, the Georgia representative who was kicked from her Congressional committee assignments in February over her endorsement of conspiracy theories, raised $ 3.2 million in the first quarter – a sum staggering for a congresswoman in her first term.

Matt Gaetz, the Republican congressman from Florida under investigation for alleged involvement in a child sex trafficking ring, made $ 1.8 million. Jim Jordan, the Ohio congressman and another vocal Trump ally, brought in $ 2.1 million – about three times what he raised in the first quarter of last year.


the amount raised in the first quarter by Liz Cheney, the member for Wyoming who voted to impeach Donald Trump for his role in the January 6 riots

Meanwhile, Sarah Huckabee Sanders, a former Trump press secretary who is now running for governor of Arkansas, said she raised $ 4.8 million in the first quarter, more than any candidate in the history of the state. About three-quarters of donations came from out-of-state, according to his campaign. Huckabee Sanders was the first politician Trump endorsed through his “Save America PAC” after leaving office.

The numbers underscore the enduring enthusiasm of Trump’s fan base and the Republican the base. It also highlights the growing power of small donors at a time when companies have suspended political spending following attacks on the U.S. Capitol, which halted the certification of Joe Biden’s electoral college victory and left five dead.

Many of America’s biggest companies – including Facebook, Microsoft, and JPMorgan Chase, as well as the American Chamber of Commerce, a major lobby group – have said they will. shoot or revise political donations in response to the January 6 riots, which were carried out by Trump supporters.

Several companies have specifically said they will not give to Republicans who oppose certification of Biden’s presidential victory, although a few have broken their promises.

But the latest filings show small private donations, many made online through the Republican Party’s WinRed platform, more than closed the gap for GOP candidates, especially those loyal to the former president. . Hawley, Cruz, Greene, Gaetz, and Jordan all voted against certifying Biden’s college election victory.

The deposits also signal how the amount of money in US politics continues to trend upward, even in a year with no major election on the schedule. The next big political event in the United States will be next year’s midterm elections, when all 435 seats in the House of Representatives, one-third of the 100-member Senate, and a series of governor’s mansions are up for grabs.

At the same time, the latest documents filed by the FEC show that a small number of Trump’s most prominent critics within his own party were able to raise money on the back of their opposition to the former president.

Liz Cheney, the Republican congresswoman from Wyoming, who was the highest-ranking member of the GOP House to vote to impeach Trump for his role in the Jan.6 riots, raised more than $ 1.5 million in the first quarter. Adam Kinzinger, an Illinois Republican who also voted for impeachment and set up a political action committee to raise money for anti-Trump Republican candidates, brought in $ 1.1 million over the three first few months of the year, including transfers from other Republican fundraising committees. .

However, Cheney and Kinzinger were just one of a handful of anti-Trump Republicans who resisted the trend of more low-key donations for those who showed less loyalty to the former president, including the seven GOP senators who voted to convict him during his impeachment trial. 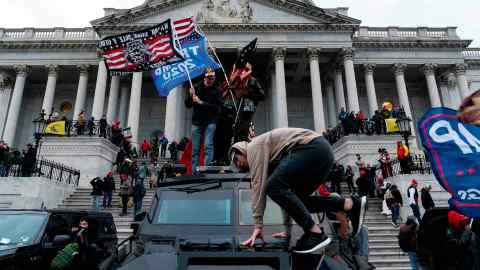 Taken together, Q1 fundraising numbers put next year’s midterms on track to be among the most expensive Congress races to date, and provide the first signs Republicans are catching up. Democrats to harness the power of the small dollar donor through WinRed. Democrats have raised huge sums in recent election cycles through their own online fundraising platform, ActBlue.

The latest FEC filings show Democrats continued to collect large numbers of campaign contributions in the first quarter of this year.

Raphael Warnock, the Democratic Senator from Georgia who won one of the two hotly contested second rounds of the Senate in the southern state of the United States in January, will be re-elected in the mid-term of next year because he has won its seat in a special election. According to the latest deposits, he raised over $ 4.5 million between January 26 and March 31.

Mark Kelly, the Democratic senator from Arizona, another key swing state, also won a special election in last year’s cycle and will therefore defend his seat next year. Kelly reported revenue of over $ 4.4 million in the first quarter.