The easing of pandemic lockdowns weighs much heavier than expected on Netflix Inc.’s growth, causing its shares to fall 13% on Tuesday.

The streaming service added just 3.98 million subscribers in the first quarter, missing Wall Street’s estimate of 6.29 million and its own forecast of 6 million. The current quarter will be even more difficult, with Netflix forecasting 1 million new customers – a fraction of the 4.44 million projected by analysts. 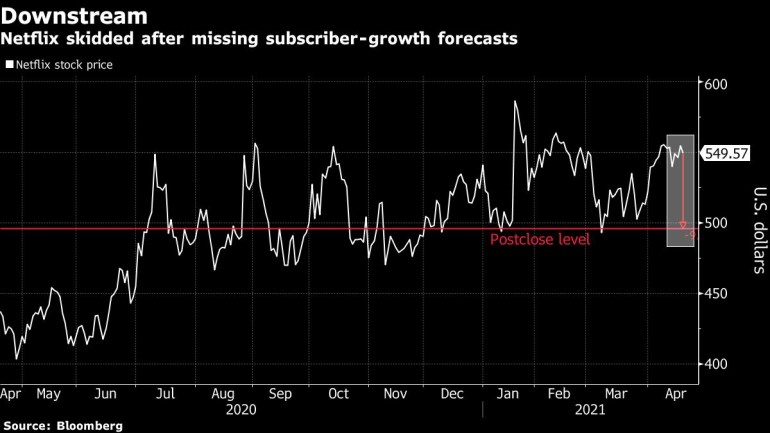 Netflix has warned for months that growth will slow after customers exit Covid hibernation, but few expected it to slow so dramatically. The first quarter of 2020 had been the strongest in company history, with 15.8 million new customers, and Netflix’s pace was still surprisingly fast in the fourth quarter.

The past three months, on the other hand, marked the slowest first quarter since 2013, when Netflix added around 3 million customers.

A lack of new issues can also contribute to the crisis. The company’s production slowed in the first quarter due to the fallout from the pandemic, causing production delays. Netflix was able to maintain its release schedule during the first months of the Covid lockdowns because it had already completed many shows. But the films and shows that were supposed to be in production in March, April and May have had to stop, resulting in the current deficit.

It all coincided with tougher competition in streaming, from Disney +, HBO Max, and Apple TV + to new entrants like Discovery + and Paramount +. Some are cheaper than Netflix, which hiked prices in the United States in October.

Europe continues to be a positive point for Netflix. The streaming service has added 1.81 million customers in Europe, the Middle East and Africa, which is at the helm of the company. “Lupine,” a French heist thriller, was the service’s most popular new series during the quarter.