Total has rejected activists’ calls to withhold payments to the Burmese military junta on its offshore gas project in the country, saying it would break the law and put local workers at risk.

The energy giant also said it has no plans to halt production from the Yadana offshore gas field, which it says is being used to generate electricity for millions of people at Yangon, the largest city in Myanmar, and in western Thailand.

The comments of the Chairman and Chief Executive Officer of Total Patrick Pouyanné in a letter released over the weekend, put the French energy group at odds with Myanmar’s civil disobedience movement, which has sought to choke the junta’s sources of income since the February 1 coup that overthrew the government of Aung San Suu Kyi.

“The first thing to remember is that not paying taxes is a crime under local law,” Pouyanné said, adding that Total had in fact paid “absolutely no tax” to the military since the coup. “For the simple reason banking system does not work anymore “.

He added that the company had considered putting $ 4 million in monthly taxes in an escrow account, “but such non-payment would expose the management of our branch to arrest and imprisonment.” Pouyanné said Total would also consider donating the equivalent of the taxes it owes to the state to human rights groups in Myanmar.

Total is the operator and largest shareholder of the Yadana gas field off the coast of southern Myanmar. It manages the field and its pipelines with Chevron, the Thai PTT, and the state-owned Myanmar Oil and Gas Enterprise as partners.

Human rights groups and a shadow government ousted representative of the National League for Democracy, MPs urged foreign energy companies to freeze all payments to the MOGE since the coup. But multinationals have pointed out that most of what they pay the state is in the form of natural gas used to generate electricity.

Justice for Myanmar, a campaign group calling on companies to sever ties with the military, rejected Pouyanné’s explanation.

“Total will be complicit in the Burmese junta’s crimes against humanity if they start making payments to the military,” spokesman Yadanar Maung said, describing the offer of donations to rights groups such as “A horrible and absurd equation which plays with the life of our people”.

The UN has condemned the military’s use of violence against anti-coup protesters, and the US and UK have sanctions imposed against the head of the junta, General Min Aung Hlaing, other senior officials and companies linked to the army. The military violent repression has resulted in at least 557 deaths and more than 2,600 arrests, according to a leading human rights group.

Pouyanné said Total had given instructions to cease drilling operations, decommission a rig and halt development of a gas discovery on an offshore block.

However, he said the French energy group would only suspend gas operations at Yadana if it was no longer possible to produce it safely due to “the dramatic events taking place on land”. 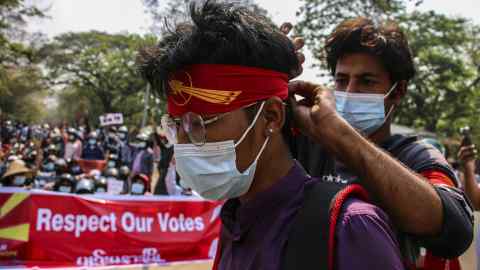 Pouyanné indicated that the Thai authorities had also alerted Total to the “importance” of the gas field for western Thailand. “Can a company like Total decide to cut off the electricity supply to millions of people – causing the closure of hospitals and businesses, disrupting daily life – with all the consequences that will have?”

“Having seen the practices of the junta in other economic sectors, and given the vital importance of this gas for the production of electricity, we have no doubt that the junta will not hesitate to force our employees to produce electricity. gas through forced labor, ”he said.

Total’s comments echo those made by Chevron, who also came under pressure from activists. Chevron said last month that its direct payments were limited to taxes and that it had played no role in distributing the gas received by MOGE.