As of 2021, 82.4 million people around the world were displaced by conflict or persecution.

Thirty million of them are refugees, the rest are internally displaced (48 million) or asylum seekers (4.1 million), according to the latest UNHCR report report. Almost half of these forcibly displaced people are children.

55% of the refugees come from three countries: Syria, Palestine and Venezuela.

During the COVID-19 pandemic, “everything else came to a standstill, including economies, but wars, conflicts, violence, discrimination and persecution, all of the factors that caused these people to flee, have continued, ”said UNHCR chief Filippo Grandi.

In 2020, 1.27 million people from 64 countries became refugees. The infographic below shows the desperate journeys of these people despite the additional challenges brought on by COVID-19.

Africa has more than a third of the world’s displaced people. By the end of 2020, at least 30.6 million people were displaced across the continent.

In 2020, nearly 60,000 refugees fled Ethiopia to neighboring countries following violence in several parts of the East African country. In November 2020, fighting broke out in Ethiopia’s northern Tigray region, displacing more than one million people according to the International Organization for Migration.

In the Middle East, Syrian refugees continued to flee the 10-year war in their country, with nearly 134,000 people registered in 2020. Half of them (65,000) fled to neighboring Turkey, which is now home to the world’s largest refugee community – 3.7 million people. In the same year, nearly a quarter of Syrian refugees (32,500) reached Germany.

In Latin America, nearly 400,000 refugees fled Venezuela following a political and economic crisis in the country. Of these, 139,000 were recorded fleeing to Peru, 80,000 to the Dominican Republic and 60,000 to Brazil.

In Asia, the United Nations has registered at least 29,000 refugees from Myanmar. Almost all of these refugees arrived in neighboring India (17,000) and Bangladesh (12,000).

In Europe, at least 89,000 refugees fled Azerbaijan to Armenia after 44 days of fighting between Armenian and Azerbaijani forces in the disputed territory of Nagorno-Karabakh.

Where are the biggest refugee camps?

Refugee camps are designed as a temporary refuge to meet the basic needs of refugees. However, many people end up living in these camps for decades. According to the United Nations High Commissioner for Refugees (UNHCR) in Kenya: “Many displaced people spend over 16 years living as refugees in temporary shelters.

The infographic below highlights some of the largest refugee camps in the world. 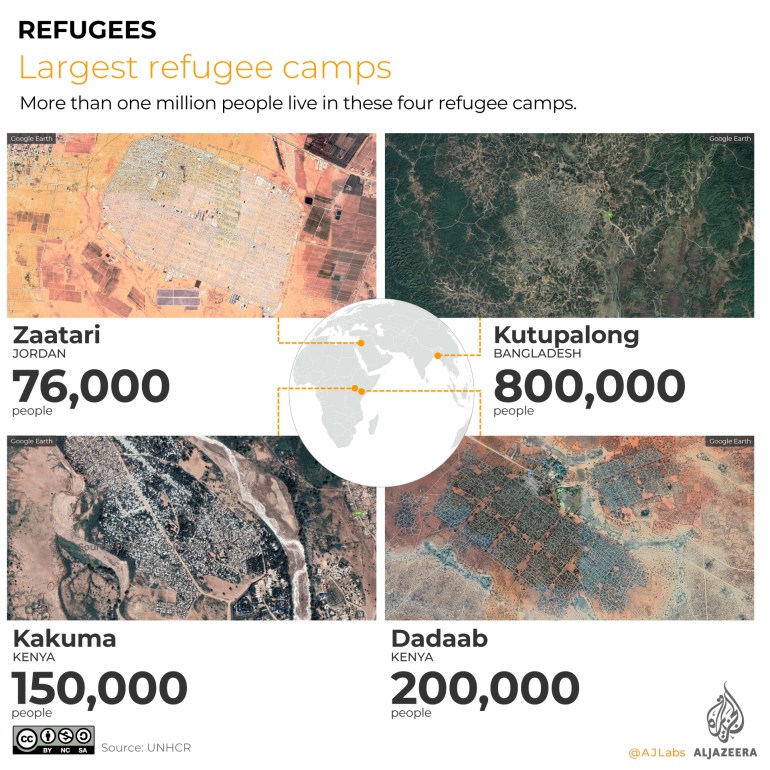 the Kutupalong camp in Cox’s Bazar, Bangladesh, is the largest refugee camp in the world. It was established informally in the early 1990s after Myanmar’s Rohingya minority began fleeing several crackdowns against them in Rakhine State.

In 2017, brutal crackdowns ravaged the state and the camp had to be significantly expanded, reaching a capacity of around 800,000 people.

On March 22, 2021, a massive fire ravaged a nearby refugee camp in Cox’s Bazar. Fifteen people were killed and tens of thousands were left without homes and personal belongings.

the Dadaab Refugee Complex Kenya has three large refugee camps – Hagadera, Dagahaley and Ifo – and is home to more than 200,000 refugees near the border with Somalia. Dadaab was established in 1991 following the civil war in Somalia and expanded in 2011 following widespread drought and famine.

the Kakuma refugee camp in northwest Kenya, at least 150,000 refugees come mainly from South Sudan and Somalia. The camp was established in 1992 following the arrival of thousands of Sudanese children fleeing the civil war.

In March 2021, the government of Kenya announced that it would close the Dadaab and Kakuma refugee camps by June 30, 2022.

In 1951, the UN established the 1951 Refugee Convention, put in place to protect the rights of refugees in Europe in the aftermath of World War II. In 1967, the convention was extended to cover travel to the rest of the world. 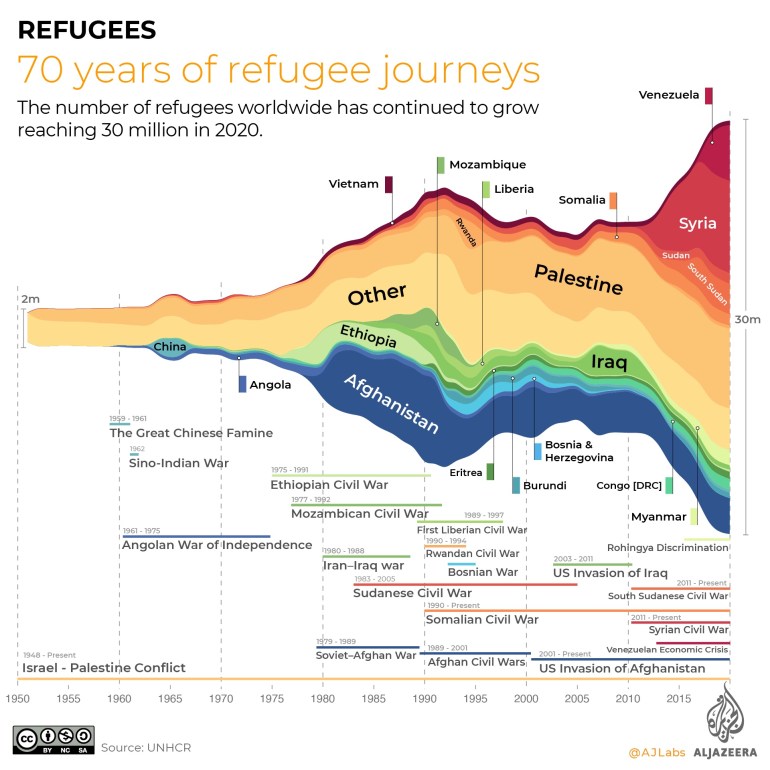 The plight of Palestinian refugees is the longest unresolved refugee problem in the world. On May 14, 1948, the British Mandate for Palestine expired, triggering the First Arab-Israeli War. Zionist militias have expelled at least 750,000 Palestinians. According to figures compiled by UNHCR, in 1952 the number of Palestinian refugees was 867,000. Today that figure is 5.7 million.

Afghanistan has been ravaged by four decades of war. From 1979 to 1989, the country was the scene of one of the last battles of the Cold War as Soviet troops waged a bloody guerrilla war against the Afghan mujahedin. For the next decade, the county struggled. Just 12 years after the Soviet withdrawal, Afghanistan would find itself invaded again, this time by the United States. The highest number of Afghan refugees was recorded in 1990, when 6.3 million refugees were reported.

Which countries host the most refugees today?

With 6.7 million people, Syrians today constitute the largest refugee population, followed by Palestinians (5.7 million) and Venezuelans (4 million). In 2020, 88% of the world’s refugees came from just 12 countries.

On the reception side, 65 percent of the world’s refugees are hosted in just 16 countries. Turkey hosts the most refugees (3.7 million), followed by Jordan (3 million) and Colombia (1.7 million).

In Europe, Germany is home to around 1.2 million refugees, the highest number on the continent.

Developing countries host 86 percent of the world’s refugees, according to UNHCR. 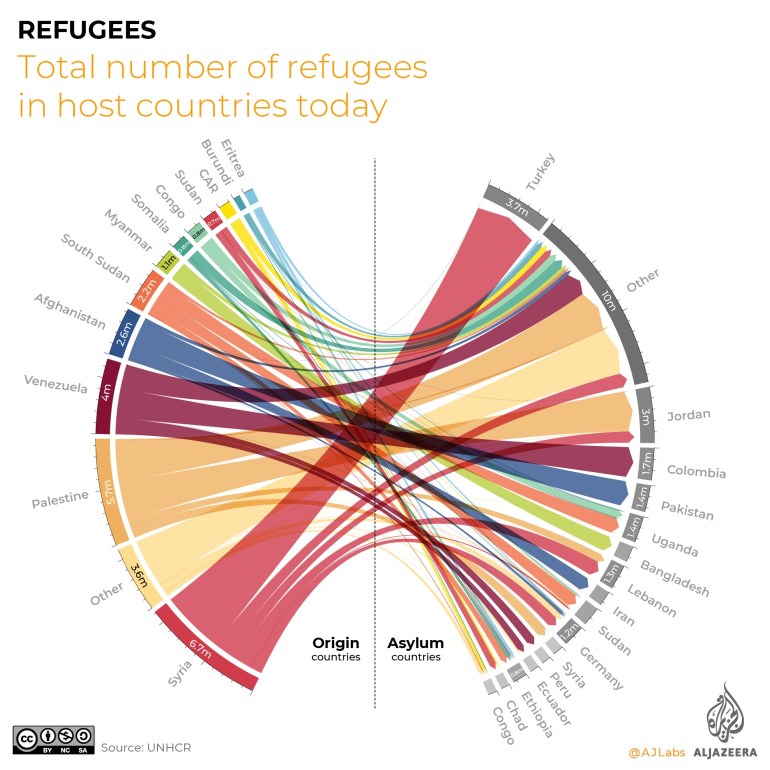